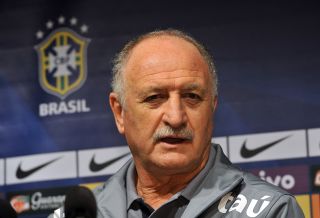 Scolari's side had to be patient to get their opening in Saturday's friendly, with forward Neymar - who was in doubt after an injury scare in training - finally breaking the deadlock just before half-time.

And Oscar rounded the goalkeeper after a throughball from Paulinho to cap off Brazil's triumph.

Scolari was pleased with the way his side adapted to the conditions and the defensive tactics of South Korea to secure the victory.

"The result was better than expected," Scolari said after the win, their 10th of the year.

"We had difficulties but overcame them really well. South Korea have quality. They were very impressive in the last 20 minutes.

"They were also very good early in the game.

"I think they were defensive. Maybe Brazil just wanted to play football and South Korea tried a little too hard to impress. They conceded twice many fouls as us."

Brazil continue their tour of the world in preparation for next year's World Cup when they face Zambia in Beijing on Tuesday.