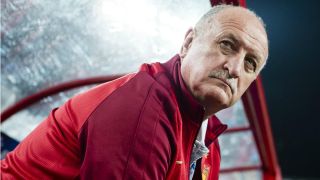 Former Brazil boss Luiz Felipe Scolari has agreed to return for a third spell as head coach of Palmeiras.

He has been without a club since leaving Guangzhou Evergrande Taobao in November last year.

Scolari was the architect of Palmeiras' only Copa Libertadores win in 1999, with a team featuring the likes of Alex, Zinho and Roque Junior.

After a year at Cruzeiro, Scolari then took charge of Brazil in 2001, experiencing further success as a formidable Selecao side won the 2002 World Cup.

He spent five years as Portugal boss before heading to Chelsea in 2008, where he only lasted until the following February.

His second spell with Palmeiras followed a stint at Bunyodkor before a return to the national team in 2012, with whom he won the 2013 Confederations Cup but left in humiliating fashion after the infamous 7-1 thrashing by Germany on home soil in the 2014 World Cup semi-finals.