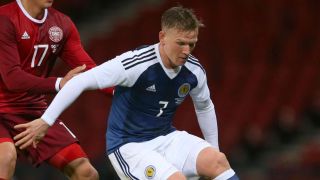 Matt Ritchie's early strike ensured Scotland secured back-to-back friendly wins as they edged past Denmark with a 1-0 victory at Hampden Park on Tuesday.

Nicolai Jorgensen tested Craig Gordon with a low drive before the break, with the goalkeeper popping up again to make a superb double save 16 minutes from time, while only a last-ditch block prevented Ritchie adding a second late on.

Having failed to qualify for Euro 2016, the result will come as a huge boost for Scotland boss Gordon Strachan, whose side face trips to France and Italy in May before beginning their World Cup 2018 qualifying campaign away to Malta in September.

Denmark boss Age Hareide, whose team also failed to book their place in France, will view it as a setback in his own side's World Cup qualifying preparations.

Scotland captain Brown was the only player to keep his place following the 1-0 win over the Czech Republic on Thursday, with Strachan handing international debuts to Kieran Tierney and John McGinn.

And the Celtic midfielder – earning his 50th Scotland cap – justified his selection early on, feeding a defence-splitting pass for Ritchie, who capitalised on a mistake by Agger to apply a cool finish.

Denmark, unchanged from the 2-1 win over Iceland, struggled to muster a response, with only a poor final ball from Shaun Maloney preventing Leigh Griffiths from being clean through on goal after 25 minutes.

That let-off sparked the visitors into life, with Christian Eriksen's whipped corner causing havoc in the Scotland box before being mopped up by goalkeeper Gordon, who had to be alert to keep out Jorgensen's fine angled drive moments later.

But Scotland still threatened, with Steven Fletcher's glancing header forcing a smart save from Kasper Schmeichel three minutes before the break.

The Leicester City goalkeeper was replaced by debutant Jonas Lossl at half-time and he had to be alert to keep out Maloney's curled effort from 30 yards.

Denmark responded, with Gordon parrying away Eriksen's effort on the edge of the area in the 74th minute, before recovering to prevent substitute Martin Braithwaite's headed rebound.

Scotland could have wrapped it up three minutes later when substitute Ikechi Anya's low cross eventually found Ritchie, but his close-range shot was superbly blocked by Andreas Christensen as the hosts secured a second consecutive 1-0 win.