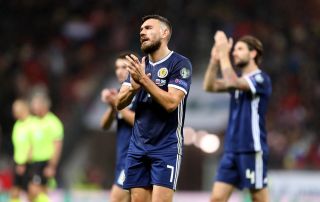 The 32-year-old West Ham forward won 28 caps and scored seven goals for Scotland since making his debut in February 2011, including netting a hat-trick against Malta in a World Cup qualifier in 2016.

Snodgrass had withdrawn from the Scotland squad ahead of Sunday’s game against San Marino with a minor calf injury, and on Tuesday morning announced his decision to retire.

In a statement on the Hammers website, Snodgrass said: “Thank you for giving me the opportunity to live my childhood dream.

“It’s been such a special feeling pulling on that Scotland jersey since I was 16-years-old.

“There have been many highs throughout my international career which I’ll always remember with fondness, including my debut against Northern Ireland and my hat-trick in Malta.

“It’s now the right time for me to step aside, though, and retire from international duty and let the boys and the younger players take my place and hopefully push the squad forward.

“I want to especially thank the Tartan Army for the special support you’ve showed me over the years. I will never forget this.”