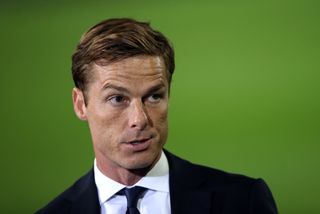 Scott Parker said Fulham are determined to finish the job after seizing a 2-0 first-leg lead over Cardiff in their Sky Bet Championship play-off semi-final.

Superb strikes from Josh Onomah and Neeskens Kebano put Fulham in a commanding position ahead of the return game at Craven Cottage on Thursday.

“Overall it was a good performance,” said Fulham head coach Parker. “We weathered the storm early on and got a foothold in the game. I think we’re well worthy of the two-goal lead at this stage.

“We worked our socks off and our foundation was built on concrete, but it will be another huge battle on Thursday.

“This is only halfway through and we’ll stand up to the challenge.”

Cardiff manager Neil Harris suggested the celebrations were excessive – “it looked like they had won the tie” he told Sky – but Parker rejected that claim with 90 minutes to come in west London.

“Neil has said a lot over the last week and few weeks, I just see a group of players,” said Parker, who lost 26-goal top scorer Aleksandar Mitrovic before kick-off with a slight hamstring injury.

“I didn’t see anything that was over the top, I just see a professional team that understood that there is only half of this tie done.

“The players were pleased, and rightly so, to score two away from home, but at the end of the game I see a real professionalism from us.”

Cardiff counterpart Harris described the second Fulham goal as a “right kick in the nuts”, but insisted the Bluebirds are not out of the tie.

“The first 25 minutes we were excellent, but we have to take one of our chances then and get on top,” Harris said.

“After the drinks break Fulham were better, but at half-time we were relatively happy. Second half, we never really got going.

“They pressed much better and made it more difficult to build attacks.”

Harris was unhappy with the award of the late free-kick, which Kebano curled home to double Fulham’s advantage.

But he said Cardiff had shown their resilience enough times this season, including when they fought back from a three-goal deficit to draw 3-3 away to champions Leeds in December, to ensure that the tie was not over.

“The first goal (on Thursday) is going to be vital,” Harris said. “If Fulham get it then it’s going be really difficult for us.

“Fulham are huge favourites now but we are capable, with the players and the camaraderie we’ve got, of scoring goals.

“We are capable of clawing this back. We have the right character and mentality.”