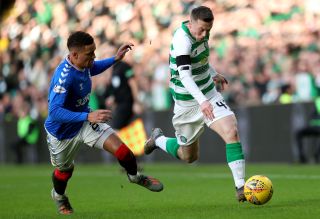 After talks with Professor Leitch and sports minister Joe FitzPatrick on Friday, the Scottish game’s Joint Response Group recommended lifting the suspension of all football activity from June 11.

Scottish Professional Football League chief executive Neil Doncaster stated the Government had given the green light to resume football training in June, with a Premiership kick-off of August 1 now a “firm target”.

However, Leitch clarified that training would be very limited during phase one of the route out of lockdown, which kicked in on Friday. Non-contact activities such as golf, tennis and physically-distanced, one-to-one training for athletes returned under the new guidelines.

Speaking to BBC Radio Scotland’s Off The Ball, Leitch said: “I’m not sure people should write August 1 on their calendars quite yet. There’s a long way to go before August 1.

“With a fair wind and the virus behaving itself, and of course the population behaving itself, there is reward to the two metres and there’s reward for not mixing your families because, if we do, we are going to go backwards.

“So I think you could maybe put in a shaded pencil on August 1 but don’t get overexcited.

Today @ScotGovFM announced the Scottish Government's next steps; Scotland's route map through and out of this crisis. You can read it here: https://t.co/CmHcG0Ktv0Please remember, nothing changes today, changes will depend on progress. #StayHomeSaveLives— Jason Leitch (@jasonleitch) May 21, 2020

“That’s what we told the sporting bodies, but that doesn’t mean you shouldn’t prepare for that. Of course we should and I was very impressed with their plans.

“I saw very detailed plans form the rugby, the horse racing and the football – very considered and very mature. The senior doctors and clinical teams from each of those sports talked to us.

“John MacLean, who does that for football, very smart, very mature, clearly being listened to by the SPFL and SFA. He is inside those decisions.

“Then they came to us in Government and they say: ‘Does this seem reasonable?’

“The planning is one thing, the go-ahead is an entirely different one. Of course they should plan and I was impressed with their plan, as was Mr FitzPatrick, but we did not give them a go-ahead.

“What you can do is physically-distanced, two-household training, whenever you like.”

Leitch added: “The other thing we can’t tell you is when phase two will start. Phase two will come if phase one works. We were very clear to them that although phase two will allow them to do more, we couldn’t guarantee them a date when that would be possible.”

Phase two allows for the “resumption of professional sport in line with public health advice” and a review is expected on a three-weekly basis.

Thanks to @JoeFitzSNP and @jasonleitch for hosting our meeting today on “Rugby Restarting”. Postive discussions and plans for getting the sport restarted in a phased and measured way aligned to Govt advice. #Asonehttps://t.co/e2QZ6t9Pxd— Dom McKay (@dom_mckay1) May 29, 2020

The Scottish Rugby Union described the meeting as “successful” and “very productive”.

SRU chief operating officer Dominic McKay welcomed an acknowledgement that “we can continue to develop our plans for our professional players to resume training in due course with a view to games potentially taking place when professional rugby resumes in line with government advice”.

The chief executive of sportscotland, Stewart Harris, was also involved in the meeting.

He said: “We will continue to work with sports at all levels to ensure their return when it is safe to do so. There is a shared commitment to making real progress in this area but public health and wellbeing remains the most important consideration at this time.

“As we move through the route map process, sportscotland will of course provide full support to all sports to help them prepare for the transition back to participation and to behind closed doors action where it is safe and appropriate to do so.”