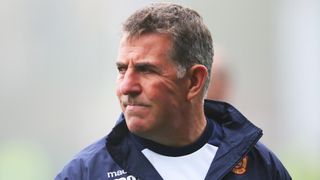 Motherwell overcame Lanarkshire rivals Hamilton Academical 1-0 to move up to seventh in the Scottish Premiership table.

Louis Lang fired home the only goal of the game on the stroke of half-time and, although Louis Moult had a second-half penalty saved by Michael McGovern, Motherwell held out for their first win at New Douglas Park since May 2009.

Hearts closed to within six points of second-placed Aberdeen and strengthened their grip on a Europa League qualification spot thanks to a 1-0 win against Partick Thistle.

Arnaud Djoum headed the only goal of the game - his first this season - after 25 minutes at Tynecastle.