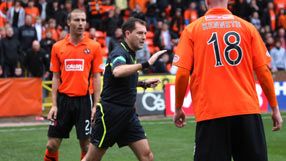 Dougie McDonald, who controversially overturned the award of a penalty in a match between Celtic and Dundee United last month, had been under pressure to quit after admitting he lied about his reason for rescinding the spot-kick.

His announcement follows this weekend's strike action by Scottish referees, who were protesting against escalating criticism and abuse of officials.

"It is with regret that I have decided, with immediate effect, to retire from my role as a category one referee," McDonald said.

"My category one colleagues decided rightly to withdraw their services from matches this weekend in response to the outrageous way they have been treated by sections within Scottish football and, in my opinion, the lack of support they have received from the (Scottish Football Association) General Purposes Committee in recent years."

McDonald hopes his decision to retire will draw a line under his role in the standoff and focus attention on the treatment of referees.

"Now is the time for all of Scottish football to move on," he said.

"My decision will therefore remove that issue from the debate and ensure that the next day of (strike) action - which, in my opinion, will undoubtedly come if the football community does not have a massive change of heart - will result in media coverage being concentrated on those who engage in referee bashing and those who condone it."