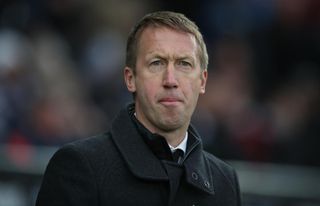 Swansea manager Graham Potter is the overwhelming favourite with the bookmakers to take over at Brighton following the sacking of Chris Hughton on Monday.

The Seagulls achieved Premier League survival for the second season under the 60-year-old – but he was sacked a day after their campaign ended with a home defeat which saw Manchester City crowned champions.

Hughton’s side managed just two wins from their 18 league matches since the turn of the year and finished 17th, just two points clear of Cardiff in the final relegation place.

The 4-1 loss to City proved to be the last straw for Albion chairman Tony Bloom, who said it was “the right time to change” as Hughton leaves after four and a half years at the helm.

“Undoubtedly, this has been one of the most difficult decisions I have had to make as chairman of Brighton & Hove Albion, but ultimately one I have made due to how we struggled in the second half of the season,” Bloom said in a statement released by the club on Monday morning.

“Our run of three wins from 23 Premier League matches put our status at significant risk.

“It is with that in mind, and the performances during that period, that I now feel it’s the right time for a change.”

The former Newcastle boss replaced Sami Hyypia at the Amex Stadium in December 2014, with Brighton just above the Sky Bet Championship relegation zone.

After defeat in the play-off semi-finals in 2016, Hughton led Albion back to the top flight for the first time since 1983 the following season with a second-placed finish.

Despite a decent first half of the season and a run to the FA Cup semi-finals, league form tailed off and left Albion in serious danger of the drop before safety was secured on the penultimate weekend of the season.

“Chris has done an excellent job over the past four-and-a-half years,” added Bloom.

“First stabilising our club, reaching the play-offs in his first full season, securing our first-ever promotion to the Premier League, and retaining our status in two successive seasons.”

Potter was installed as the clear early favourite, the former Stoke defender having impressed at Swansea since he joined from Swedish side Ostersunds in June.

Hughton left with Brighton’s best wishes as the decision split fans of the club and the wider footballing world alike.

“Chris will always be very fondly remembered by Albion staff and fans as one of our club’s finest and most-respected managers,” continued Bloom.

“I would like to wish Chris, Paul and Paul – who have all worked extremely hard throughout their time here – every success for the future, and thank them on behalf of everyone at the club.

“They will always be welcome at the Amex, and will be remembered here with great affection.”

Kick It Out, who call for equality in football, also tweeted their support for Hughton, who has also previously managed Norwich in the Premier League.

“All of us at Kick It Out hope you are back in football soon Chris.”