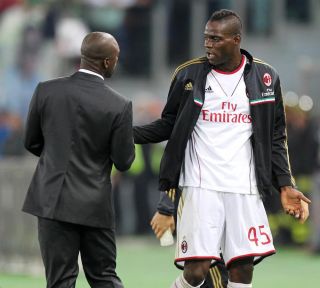 Miralem Pjanic and Gervinho scored for the second-placed Roma in the Italian capital, dealing a big blow to Milan's hopes of qualifying for the UEFA Europa League next season.

Milan trail fifth-placed Inter by five points, and have played a game extra, and the San Siro club's frustration was evident at the Stadio Olimpico.

Balotelli and Taarabt had words on the pitch, before the former also took his anger out on Seedorf after being substituted on 69 minutes.

"We just said everything was OK. No problem. Mario was one of three substitutions I made, so I don't see why we should analyse every single one," Seedorf told Sky Sport Italia of Balotelli's withdrawal.

"I wanted to give room to Giampaolo Pazzini and he did very well, almost scoring a goal.

"Balotelli was unable to express himself to the full tonight, but that can happen after several weeks of impressive performances.

"I have been in locker rooms for many years and these things happen.

"Balotelli and Taarabt talked, there are no problems between them.

"It's best to avoid these things, though in the heat of the game they can happen and all players know what it's like out there."

Seedorf gave praise to Roma, who remain in the title race with the win, especially due to the quality of Pjanic's opening goal, that saw him nutmeg Milan defender Adil Rami.

"We certainly have to compliment a great side like Roma for their season and we saw their strength again tonight. In any case, my team was more courageous in the second half and it's a shame we were unable to equalise," he said.

"When you see a goal like that, especially the nutmeg on Rami, you can only stand and applaud."

Seedorf, though, lamented his side's defensive tendencies early, which saw them sit back in their formation.

"The way Roma play, with a few reference points and Francesco Totti and Adem Ljajic coming back, creates problems for everyone," he said.

"I thought we did pretty well to contain them in the second half, as we pushed up more and took the ball off them earlier. We were too deep before the break."