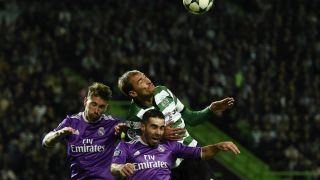 Real Madrid defender Sergio Ramos refused to point the finger at Fabio Coentrao after the Portugal international clumsily conceded a penalty in his side's hard-fought 2-1 Champions League win over Sporting CP on Tuesday.

Coentrao raised his arms to appeal for handball against Joel Campbell in the closing stages of the game, only to then see the ball hit his own arm, leaving referee William Collum with no choice but to award Sporting a penalty that saw them level the scoring with 10 minutes left through Adrien Silva.

However, Karim Benzema settled the contest in Madrid's favour, clinching their place in the knockout stages of the Champions League, with a superb header in the 87th minute to spare Coentrao's blushes.

But Ramos told reporters: "We were made to suffer in the end and they got an equaliser, but the best thing was the way we reacted. We continued to fight until the end and managed to get ourselves back in front. I would never put the blame on a team-mate.

"Mistakes are collective and every day it is someone's turn to make one.

"But the important thing is that we won."

Coentrao, meanwhile, was quick to admit he should have dealt with the situation differently.

"I made a big mistake on the penalty," the left-back said.

"I have to be more focused in such situations and not be appealing for the handball. I appealed for it because I thought that's what it was, but I can't be doing that.

"It will be very tough to get playing time. Marcelo is the best left-back in the world right now. I have to make the most of the minutes I get given, train more and give my all. I feel bad right now and can only alter that through hard work."