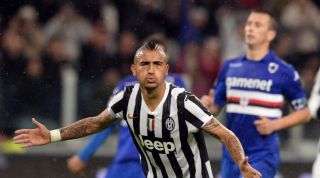 Rafael Benitez's side are due to face Bologna on Sunday and will need a win to keep pace with the top two after Roma comfortably beat Livorno 3-0 and Juventus edged a determined Sampdoria side 4-2.

Antonio Conte's men set a new club record with 11 consecutive wins in the league last time out and continued their fine form against Sinisa Mihajlovic's men, going two goals ahead after 24 minutes through Arturo Vidal and Fernando Llorente.

There was time for an Andrea Barzagli own goal and Vidal's second before the break with Juventus' co-owned striker Manolo Gabbiadini making life uncomfortable for Conte's men in the second half.

However, Paul Pogba struck a long-range effort 12 minutes from time to wrap up the three points as the champions maintained their 100 per cent record at home in the league and matched Roma's earlier victory.

Rudi Garcia's charges made sure Attilio Perotti's first game in charge of Livorno was one to forget, brushing their opponents aside in a convincing triumph.

Having taken over from Davide Nicola on Monday, Perotti's reign at the club could hardly have got off to a worse start, with Mattia Destro opening the scoring from close range after just six minutes.

Adem Ljajic's cross was backheeled into the path of Destro, who made no mistake with a powerful finish before Kevin Strootman added a second half an hour later.

Roma saw an effort ruled out for offside before the break and, despite not being as impressive in the second half, the hosts added a third when Ljajic struck 12 minutes from time.

After seeing his side deny their relegation-threatened opponents a shot on target, coach Garcia said: "I'm happy with this win. We scored three without letting the opposition have any chances. It's a good evening's work.

"We're second and we'll do everything we can to obtain the best results possible in the second half of the season."

Juve remain eight points ahead of Roma and are now 13 clear of Napoli.