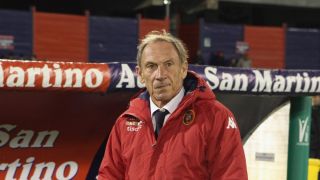 Zeman, 67, was rehired as coach by Cagliari on Monday to replace Gianfranco Zola, who had only taken over from the Czech on December 24.

But Cagliari could surge away from fellow drop-zone outfits Cesena and Parma, who face Inter and Sassuolo, respectively.

Atalanta, who sit 17th, host 12th-placed Udinese, while Chievo will travel to seventh-placed Genoa on Sunday.

Empoli, however, have their own reasons to believe in victory, as they have not lost in six games.

Leaders Juventus will play in the other match on Saturday as they visit Palermo.

Juve winger Simone Pepe, who has played in his club's past two matches in all competitions after approximately two-and-a-half years battling injuries, hopes to be involved again.

"We need to keep our focus because Palermo have gone a long time without losing a home game and we must try to stretch our advantage over Roma," Pepe told Juve's website.

Roma will host Sampdoria on Monday, Lazio will visit Torino, Napoli travel to Hellas Verona and Fiorentina take on Milan.