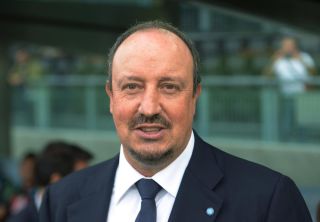 Having looked to be back on track after a stuttering start to their Serie A campaign, Napoli suffered a surprise 2-0 defeat at the hands of Swiss side Young Boys in the UEFA Europa League.

Forced to defend the squad from criticism, Benitez played down fears by stating Napoli remained on the right track.

And his team delivered on Sunday as goals from Gonzalo Higuain, Marek Hamsik and Jose Callejon helped ensure a 6-2 victory over Hellas Verona at the Stadio San Paolo.

Higuain scored a hat-trick - having been referred to as "a hungry lion in a cage" by Benitez following a tough start to the league campaign - and the Spaniard was pleased to see his side showcase their reaction to Thursday's defeat.

"We let Higuain out of the cage tonight so we can put him away again until Wednesday," Benitez joked to Sky Sport Italia.

"The most important thing for me was the reaction and attitude of the team, from start to finish, as we never stopped looking for the goal.

"I still need to point out we have a great squad and all of those elements need to be used in Serie A and the Europa League."

With strugglers Atalanta having only won once at home in the league this term, Napoli will be hopeful of being able to pile the pressure on those above them - with Milan and Lazio both on the road.

Having been frustrated by Josip Ilicic in their 1-1 draw with Fiorentina, Filippo Inzaghi's men travel to Cagliari while Lazio go in search of a fifth straight Serie A win against Hellas Verona on Thursday.

Inter's chaotic week, which saw long-serving honorary president Massimo Moratti resign, ended with victory over Cesena on Sunday and Walter Mazzarri's side have the chance to end Sampdoria's unbeaten start to their top-flight campaign.

Sinisa Mihajlovic's side have been in fine form, holding title-chasing Roma to a goalless draw at the weekend, and Rudi Garcia's seek a response as they host Cesena.

Defeat for Roma would allow Juventus to stretch their lead at the top to six points in their search for a fourth straight Scudetto as the defending champions travel to Genoa.

Torino can inflict a sixth consecutive defeat on bottom side Parma while fellow strugglers Palermo and Chievo meet at the Stadio Renzo Barbera.

Udinese travel to Fiorentina for a repeat of last season's Coppa Italia semi-final after strugglers Sassuolo host Empoli in Tuesday's only game.