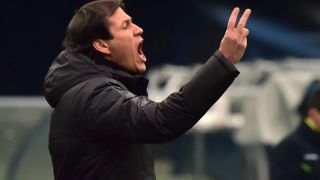 Roma have drawn six of their past seven league matches to see their buffer ahead of high-flying Napoli reduced to just three points after 24 rounds.

The Romans were held to a 1-1 draw at lowly Hellas Verona last time out, presenting Napoli with an opportunity to claim second place by the end of the round depending on results.

With Napoli within touching distance, Garcia knows Roma must improve if they want to consolidate their position against Juve, who boast a nine-point lead atop the table ahead of Monday's trip to the Stadio Olimpico.

"We need to maintain possession because that allows you to score. We needed to be more effective in front of goal against Hellas," said Garcia, who spoke prior to Roma's UEFA Europa League second leg fixture against Feyenoord.

"Our opponents scored with their only chance of the match, but that's football – when you get a chance, you must score."

Garcia added: "We just need to work hard and get the win on the field. I want to see a compact side.

"Lately, we've been trying to protect the result too much, because the guys have been desperate to win. As it happens, we've ended up dropping off our opponents too much."

In-form Juve, who have won the past two meetings between the teams, are favourites to extend their lead following Tuesday's 2-1 victory over Borussia Dortmund in the first leg of the UEFA Champions League last 16 tie.

Napoli, who are in action in the Europa League midweek, could leapfrog Roma on Sunday should they beat hosts Torino by a big margin in Turin.

Inter are in the midst of a three-match winning run in Serie A since losing back-to-back games to Sassuolo and Torino.

Roberto Mancini's men have scored a total of nine goals in victories over Palermo (3-0), Atalanta (4-1) and Cagliari (2-1), with Mauro Icardi and Fredy Guarin leading the way with three apiece, to rise up to eighth in the standings.

Lazio - five points adrift of Napoli in third - are also in action on Sunday as they travel to Sassuolo.

Embattled Parma, who are rock bottom and on the brink of bankruptcy, are on the road against high-flying Genoa.

Sampdoria will be out to snap a six-game winless streak when they tackle Atalanta, second-bottom Cesena host Udinese, Palermo go head-to-head with Empoli and Hellas Verona face relegation-threatened Cagliari.

Meanwhile, Milan kick-off the round on Saturday as they do battle with Chievo.