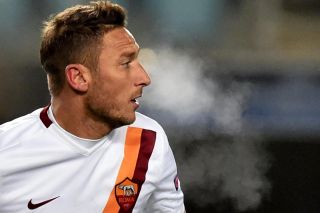 There are three points separating second-placed Roma and defending champions Juve atop the Serie A table approaching week 13.

Since then, Roma have travelled to Moscow, where they conceded in the 90th minute to draw 1-1 at CSKA Moscow in the UEFA Champions League on Tuesday.

The last-gasp equaliser did not sit well with Roma captain Francesco Totti, who opened the scoring in Russia.

"It was like getting punched by Mike Tyson, because I really did not expect that goal right at the end," Totti told Sky Sport Italia.

"We played a good first half but being a big team means coming here and taking the initiative. We did not control the ball well towards the end and we were punished for it.

"It was very difficult to play the ball on the ground in this cold but we are not looking for excuses. Unfortunately this little incident happened and nobody expected it."

Roma welcome an Inter outfit to the Stadio Olimpico desperate to win for the first time under new coach Roberto Mancini.

Mancini was thrust into the hot seat on Sunday, drawing 1-1 with city-rivals Milan in his first match in charge since returning to the San Siro.

Inter - 14 points adrift of top spot in ninth position - are winless in their past three outings in Serie A, but defender Juan Jesus believes the club are already showing signs of improvement with Mancini at the helm.

"With Mancini things are going well. It is an honour to be coached by him, I have so much to learn and I am just happy," he said.

Juventus are also in action on Sunday, hosting struggling Torino in the Turin derby.

And Juve come into the clash on the back of a 2-0 defeat of Malmo in the Champions League on Wednesday.

Carlos Tevez - the league's leading goalscorer (nine) - was on target in Sweden midweek.

High-flying pair Sampdoria and Napoli complete the round on Monday, in a clash that pits fourth against third.

In other fixtures, Milan - winless in five matches - play Udinese on Sunday.

Fiorentina will be out to make it back-to-back wins when they travel to lowly Cagliari, while cellar-dwelling Parma travel to Palermo.

Empoli and Atalanta, who hover just a point above the relegation zone, go head-to-head.

Genoa can end a run of consecutive draws at Cesena.

Sassuolo and Hellas Verona kick-off the weekend's action on Saturday, while Chievo and Lazio are in action later that day.