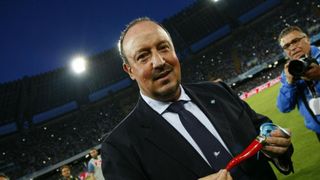 Rafael Benitez's Napoli send-off ended in disappointment as they missed out on the UEFA Champions League in a 4-2 defeat to Lazio in a match that saw two players sent off and Gonzalo Higuain miss a crucial second-half penalty.

Napoli coach Benitez confirmed earlier this week that he would be leaving Stadio San Paolo as rumours of a move to Real Madrid gather pace.

The Spaniard could have signed off by securing a spot at Europe's top table with a victory on home soil, but the former Liverpool boss saw his side lose out in a thrilling season-ending encounter.

Lazio were 2-0 up at the break. Marco Parolo's deflected effort broke the deadlock, before Antonio Candreva capitalised on Kalidou Koulibaly's error to coolly slot home the second.

Napoli fought back, though, as Higuain bagged a brace either side of Parolo's red card for two bookable offences.

The Argentina striker had the perfect chance to make himself a hero when Senad Lulic fouled Christian Maggio in the penalty area, but the former Real man blazed his effort over the crossbar.

Napoli's night then unravelled as Faouzi Ghoulam was sent off in the 70th minute, and Lazio ensured a return to the Champions League through late goals from Ogenyi Onazi and Miroslav Klose.

That loss proved even more costly as Fiorentina defeated 10-man Chievo 3-0 to move above Napoli into fourth. Roma were beaten 2-1 by Palermo at Stadio Olimpico thanks to Andrea Belotti's 94th-minute winner, but Rudi Garcia's men still finish the season second.

Genoa are waiting to hear if their appeal to be granted a UEFA license is successful. They had Armando Izzo sent off in a 3-1 loss at Sassuolo - whose head coach Eusebio Di Francesco signed a new deal on Sunday - but finish the season sixth and will play in the Europa League should a license be granted.

Sampdoria will take Genoa's place in Europe's secondary competition should they be denied. Sinisa Mihajlovic's side were held 2-2 at home by rock-bottom Parma in their finale.

Inter ended a disappointing season with a thrilling 4-3 victory at home to Empoli with all seven goals coming in the second half. Mauro Icardi struck twice for Roberto Mancini's side at San Siro to finish at the league's joint-top scorer, while Levan Mchedlidze's second goal for the visitors in the 88th proved a consolation.

Cagliari were also 4-3 victors at home to Udinese with four goals scored in the last 11 minutes, while Torino thrashed relegated Cesena 5-0.