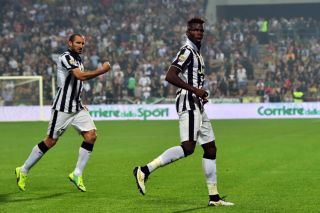 Massimiliano Allegri's men claimed a sixth win from as many games prior to the international break when beating Roma 3-2, but failed to find top gear at Stadio Citta del Tricolore.

Sassuolo claimed an unlikely lead after 13 minutes through Simone Zaza, a player previously co-owned by Juventus, only for the visitors to respond swiftly courtesy of a stunning Paul Pogba strike.

However, Pogba's goal failed to spark the champions into action as they found themselves continually frustrated by a hard-working Sassuolo outfit, who climb off the foot of the table.

Roma's 3-0 win over Chievo earlier on Saturday ensures Juve's lead at the summit has been cut to one point, with Allegri likely to view this game as a missed opportunity.

Juve had won their previous 13 league matches, their last dropped points coming in a 2-0 loss at Napoli on March 30.

Sassuolo, still to win a league game this season, showed no sign of being overawed, despite some early Juventus pressure.

Fernando Llorente was first to test Andrea Consigli after 12 minutes, forcing a smart save following a teasing cross from the right, and Roberto Pereyra sent the rebound over the bar.

Juventus were left stunned by their hosts just 60 seconds later, when Zaza forced a parried save from Gianluigi Buffon, only for the ball to eventually find its way back to the 23-year old, who applied a smart finish to give his side the lead.

Sassuolo began to look more confident on the back of that goal, enjoying plenty of possession in the middle of the park as a shell-shocked Juventus initially struggled to find any rhythm.

However, the good work of the home side was undone in sublime fashion on 19 minutes as Pogba was allowed to cut inside from the left, before curling home an exquisite finish from the edge of the box.

The momentum shifted in favour of Juve for the remainder of the opening half, with Consigli forced into an impressive double save just before the break to deny Pogba and then Carlos Tevez.

However, Sassuolo nearly took the lead again after 51 minutes when Domenico Berardi, on loan from Allegri's men, saw a curling free-kick whistle past the post.

Zaza forced Buffon into a smart save 15 minutes later, but Juventus predictably demonstrated greater urgency in attack as the game approached its conclusion.

Some great work down the right by Pereyra saw him cut the ball back for substitute Kingsley Coman to scoop over, while Pogba forced a terrific save from Consigli 10 minutes later following Tevez's dinked ball into the box.

A decisive breakthrough continued to elude the visitors as Sassuolo held on for an impressive point.

Juve's frustration was summed up by Simone Padoin, an unused substitute, being sent off in stoppage time.