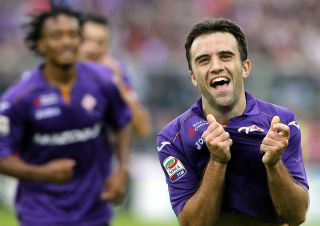 Fiorentina had not beaten Juventus at home for 15 years and that barren run looked set to continue as Carlos Tevez's penalty followed by a Paul Pogba strike sent them in at half-time 2-0 ahead on Sunday.

But Rossi's hat-trick and a goal from Joaquin sealed a spectacular comeback for Vincenzo Montella's men, as Juventus wasted the chance to gain ground on leaders Roma.

Torino twice led through goals from Alexander Farnerud and Ciro Immobile, which were cancelled out by equalisers from Fredy Guarin and Rodrigo Palacio.

A second from Palacio looked to have won it for the visitors before Torino grabbed a last-minute equaliser from a Nicola Bellomo free-kick.

At the bottom of the table, Sassuolo got their first Serie A victory with a 2-1 win over fellow strugglers Bologna, with Domenico Berardi and Antonio Flores Flores on target for Eusebio Di Francesco's  men.

Sampdoria moved out of the relegation zone with a dramatic 2-1 win at Livorno. Eder gave the visitors an early lead before Luca Siligardi equalised in the second minute of injury time, but Nicola Pozzi's 96th-minute penalty won it for Sampdoria.

An Alberto Gilardino double gave Genoa a 2-1 win over Chievo, who have now lost four games in a row and six in seven.

Hellas Verona kept up their remarkable early-season form as two Jorginho penalties helped them come from behind to beat Parma 3-2, moving Andrea Mandorlini’s side up into fourth place.

Elsewhere, Stefano Colantuono's Atalanta got their third win in a row with a 2-1 home victory over Lazio, thanks to a late German Denis winner.