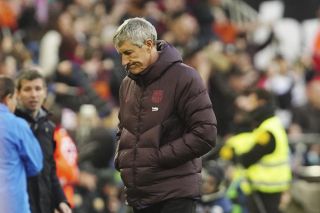 Quique Setien has admitted he would welcome another striker at Barcelona should the club pull off a January signing.

The Catalan giants are trying to add a new recruit this month to offset Luis Suarez’s knee injury that will keep the Uruguay forward out of action for four months.

Barcelona will host Leganes in the Copa del Rey last 16 on Thursday, with the club appearing to have failed in a bid to prise Richarlison away from Everton.

Negotiations are understood to have broken down on a deal for Valencia’s Rodrigo too, and Setien conceded he would be happy to see a new face arrive before the end of the month.

“I am delighted with what I have,” said Setien.

“We can’t deny that it would be interesting if another player could arrive.

“I depend on those who I have and whoever may arrive is also welcome.

“If that doesn’t happen I will be delighted with what I have. If a number nine comes he’ll be welcome. This team is ready to compete on all fronts.”

Gearing up to host La Liga strugglers Leganes at the Nou Camp on Thursday, Barca boss Setien insisted his side must still be on their guard.

“The reality is that this team can make things difficult for a lot of clubs, they are doing things fairly well despite their position in the table,” said Setien.

“What they do they do well. They’ve improved and have another dynamism they didn’t have a couple of months ago.

“They can spring a surprise, we need to be completely focused on the fact this is not going to be easy.

“I’ve always liked the Copa del Rey. I’m definitely going to try to win it, just like I will try to make us top of La Liga and to win the Champions League.”

Leganes boss Javier Aguirre insisted his side can still carve out the chance of victory, despite Barcelona being the clear favourites.

“I would not tell you that we are favourites because I would lie, but we will have our chance at Barcelona,” said Aguirre.

“We will try to take advantage of our virtues that we have, the team wants and sees it as a golden opportunity, and it would also be a magnificent boost for La Liga too.”