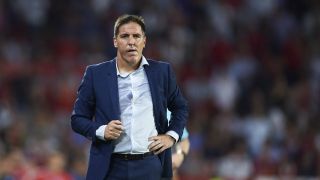 Sevilla got their revenge on Spartak Moscow with a 2-1 win that gets their Champions League campaign back on track, just two weeks on from suffering humiliation in Russia.

Eduardo Berizzo's men incredibly lost 5-1 in the teams' reverse fixture to put their hopes of reaching the knockout stages under threat, but Spartak were outclassed on Wednesday.

Clement Lenglet and Ever Banega got the goals to ensure Sevilla move back into the qualification places in Group E - a point behind pool leaders Liverpool, but crucially now two clear of the Russian champions.

Spartak had been unbeaten in 13 matches in all competitions, but they paid the price for a slow start as Lenglet netted before the visitors had forged any sort of opening at the other end.

While Sevilla were comfortable for large periods and doubled their lead through Banega's brilliant 20-yard strike, Spartak substitute Ze Luis' 78th-minute goal ensured a nervy finale that the home side saw out.

Berizzo made only one change to the Sevilla side thrashed at Otkrytiye Arena and they immediately set about making amends.

Nolito sent a cushioned volley just over as the home side kept the pressure on and then, after half an hour, the breakthrough arrived. Banega delivered a corner from the left and Lenglet rose highest to nod into the bottom-right corner from six yards, securing a deserved lead.

Spartak had offered nothing as an attacking threat up until that point, but only a smart Sergio Rico stop kept Fernando from firing an instant equaliser with a curling free-kick.

A marvellous Lenglet pass, from deep inside his own half, should have created a second Sevilla goal shortly after half time, but Nolito dragged his finish wide after running from left to right.

The classy centre-back could also have doubled his own personal tally but, after seeing Selikhov charge from his line and drop a set-piece, Lenglet awkwardly nodded a difficult chance off target.

It was Banega who looked to have made the game safe, though, shimmying onto his left foot on the edge of the area to curl high past the goalkeeper and into the top-left corner.

And only a desperate goal line lunge from Dmitri Kombarov kept Wissam Ben Yedder from supplying the third, with Selikhov beaten by a tame prod.

The failure to get that goal looked to be very costly indeed when Spartak quickly pulled one back. Rico dashed from his line to block off Denis Glushakov's effort, but succeeded only in nudging the ball into the path of Ze Luis for a simple tap-in.

The visitors then ended the game on top, but a defence marshalled by the excellent Lenglet kept them at bay to seal three crucial points in the race for a last-16 spot.