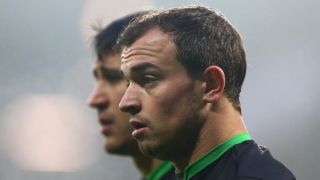 Mark Hughes has revealed Stoke Ctiy may have to make do without the services of Xherdan Shaqiri when they take on Arsenal at the weekend due to a hamstring injury.

The Switzerland international was forced to sit out Wednesday's 3-1 win over Norwich City and Hughes has made it clear a return on Sunday is unlikely.

"Xherdan may miss out on Sunday's game," Hughes told the official Stoke website.

"The likelihood is he will probably need at least 10 days and possibly more and that’s a real shame.

"It's s a shame because he's just started to acclimatise to the Premier League and we could have used his guile versus Norwich.

"He could have helped break a resolute Norwich side down but thankfully we didn't need him in the end and it was a good three points."

Meanwhile, Hughes is confident Marko Arnautovic will be ready to feature against Arsenal.

"As far as I'm aware everybody else is ok," he added.

"Arnautovic has been feeling a little bit stiff in his hamstring. We took him off toward the end of Wednesday's game to try and protect him a little bit."