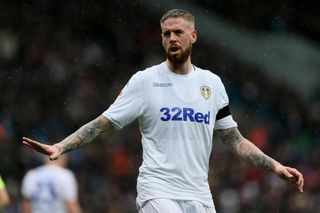 Both sides knew this all-Yorkshire encounter could have a massive bearing in the race for automatic promotion, with centre-back Pontus Jansson going as far as to call this the biggest game of many Leeds players’ lives.

But Marcelo Bielsa’s side blew several good opportunities to beat Chris Wilder’s men for the second time this season, with Basham’s second-half strike sealing Sheffield United a 1-0 win that sees them usurp the hosts in second spot.

Elland Road was bouncing from the start and bore witness to an engaging opening period, with Leeds dominating the opening 40 minutes before wobbling as half-time approached.

The driving rain and sodden pitch continued to make for difficult conditions after the break, yet both sides fought on manfully and Tyler Roberts smacked the outside of the post as Bielsa’s men pushed.

But Sheffield United dug deep and capitalised on a 71st minute error by Leeds captain Liam Cooper as Billy Sharp put in Basham to score from the edge of the box.

Jansson, by now limping heavily, went closest to levelling after being deployed as makeshift frontman, but ended the match in goal after Kiko Casilla was sent off for bringing down Sharp at the death.

The Sheffield United celebrations belied manager Wilder’s pre-match comments downplaying the importance of this match, which played out in front of an atmosphere far more boisterous than most lunchtime kick-offs.

Bielsa’s side dominated much of the first half and had the better chances on a saturated pitch.

Patrick Bamford looked set to score from a Pablo Hernandez pull back inside eight minutes had it not been for a block, with Jack Harrison left holding his head in his hands soon after having turned over.

Leeds were probing and Bamford tried his luck from an acute angle, before Roberts headed just wide.

Each missed chance led Bielsa to become increasingly agitated and offered hope to the Blades, who had struggled to get a foothold on proceedings before ending the half on top.

While Leeds survived a penalty-box melee, David McGoldrick and Sharp had chances before Basham lost his composure after rounding Leeds goalkeeper Casilla.

The second half was a far edgier affair, with Roberts eventually sparking things into life by rattling the outside of the post in the 59th minute.

But just as the Blades looked to be creaking, they landed a hammer blow at the other end.

Ponderous defending by Cooper allowed Sharp to collect the ball and play in Basham, whose strike from the edge of the box found the bottom left-hand corner.

Leeds’ response to the 71st minute setback was predictably gung ho and the best opportunity fell to Jansson five minutes from time.

Struggling to move due to injury, the defender was deployed up front with all three Leeds substitutions made and turned agonisingly wide.

There was more drama to come as Sharp burst through in stoppage time and was taken to ground by Casilla, who was sent off for the challenge. Fan favourite Jansson donned the gloves but there was to be no more goals.