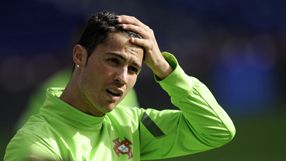 "It was on August 20th, 2003, against Kazakhstan, that I put on our national shirt for the first time. It was one of the most memorable moments of my life and a path which I am proud of," Ronaldo wrote on his Facebook page.

He came on as a substitute for Luis Figo in what was, in retrospect, a symbolic handover from one Portuguese hero to another.

Ronaldo, the future 2008 world player of the year, took 2001 world player Figo's mantle and helped inspire Portugal to third place in FIFA's world rankings even if a first major international trophy is still elusive as he struggles to shrug off accusations he goes missing in really big games.

At 27, he will become one of the youngest European footballers to reach 100 caps behind Germany's Lukas Podolski and Estonia's Kristen Viikmae.

He is Portugal's third most capped player of all time behind Figo with 127 and centre-back Fernando Couto with 110.

"On Tuesday, I will reach my 100th cap next to my people and only with a victory in mind. I would like to thank all of those who helped me reach this point and will pack the stadium cheering for us," Ronaldo wrote.

Indeed he has many to thank, starting with his first coach, Madeira primary school teacher Francisco Afonso.

"He took his chances and always had the desire to learn and go further," Afonso was quoted as saying by Portuguese daily o Jogo. "Curiously, he started playing as a centre back. But, because he wanted to organise everything his way, he eventually went up field and became a forward."

Ronaldo's club record with Manchester United and Real Madrid speaks for itself. He won Spain's La Liga last season and the Copa del Rey the campaign before after collecting three Premier League titles, a Champions League crown and an FA Cup with United.

Former Sporting coach Laszlo Boloni, who brought Ronaldo to public attention by giving the teenager several first-team starts at the Lisbon club, ranks the forward above other Portuguese idols from football to music.

Ronaldo is now world renowned for his confidence, some would say arrogance, but most of those around him in his early years mention his humbleness and hard-work ethic.

"He was very young, 18, and he integrated very well in the Portugal squad. He wanted to show everything he had, he would not stop. So much so that the older guys would tell him to breath a little. He'd get really tired because of his lack of experience."

At Euro 2004, Ronaldo came agonisingly close to glory but Greece shocked the hosts in the final. Young Ronaldo was left in tears but Figo, captain at the t