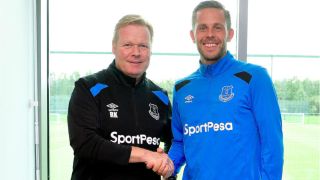 Gylfi Sigurdsson's long-awaited move from Swansea City to Everton for a reported £45million ranks as one of the biggest deals in history between two Premier League clubs.

As teams in England's top flight, awash with vast riches from television money, increasingly operate in a different financial sphere to the most of Europe, such blockbusting switches domestic have become more common.

But where does Sigurdsson rank alongside the other occasions when Premier League sides have kept their ample wealth within the division?

The man whose transfer provided at least some of the funds to lure Sigurdsson from south Wales, Lukaku set a new Premier League record with his move from Everton to Manchester United. The Belgium international is already delivering on that investment, too, having scored twice in United's 4-0 season-opening victory against West Ham last weekend.

Chelsea's club-record swoop for Torres in January 2011 provoked anger on Merseyside, but Liverpool never really missed him as the Spaniard failed to fire in his four-year spell at Stamford Bridge. Although he scored a pivotal goal in a Champions League semi-final triumph over Barcelona, Torres found the net just 48 times in all competitions over three seasons, eventually leaving for AC Milan and then Atletico Madrid.

When Walker joined Spurs from hometown club Sheffield United for £5m in 2009, few would have guessed he would one day become the most expensive English player ever. A deal worth a reported initial £45m plus add-ons means Walker has a massive price tag to live up to at the Etihad Stadium, but he impressed on his Premier League debut last weekend – scooping the man-of-the-match award in a 2-0 win at Brighton and Hove Albion.

Another Liverpool departure that caused some consternation around Anfield, Sterling's move to Manchester City came after a protracted contract dispute between the player and his club. Liverpool reportedly rejected bids of £30m and £40m before a deal was struck for an initial £44m with an additional £5m in add-ons.

City have shown a willingness to pay massive amounts for English talent, with Stones having joined the club from Everton last year. But the 23-year-old had a difficult first year as Pep Guardiola's side under-performed, conceding far too many sloppy goals as they finished third in the table. Stones' potential should still see him develop into a top talent, however.

The Iceland attacker was a key figure in Swansea's battle against the drop last season, hitting nine Premier League goals and contributing 13 assists to keep his side in the top flight. The Welsh club were thought to be holding out for £50m but settled for a reported £45m on Wednesday after weeks of negotiations. While the fee may raise eyebrows, Everton have landed themselves one of the biggest attacking threats in the Premier League.