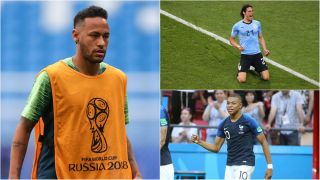 Thiago Silva hopes Neymar can emulate the pair's Paris Saint-Germain team-mates Edinson Cavani and Kylian Mappe in inspiring their country through to the World Cup quarter-finals.

Monday sees Neymar and Brazil face Mexico in Samara with many tipping the five-time champions to go all the way and lift the trophy in Moscow on July 15.

Neymar, who suffered a broken metatarsal in February, has not quite been at his sparkling best so far in this tournament but Silva hopes the forward can follow in the footsteps of his PSG colleagues.

"Yesterday when the games were over I thought the same thing, that in our game it's going to be with Neymar," Silva told a media conference.

"They [Cavani and Mbappe] were both fundamental for the victories, even if [Angel] Di Maria was eliminated he played very well.

"PSG were well represented but we're talking about the national team and I think we're well balanced.

"In the right moments the attackers have the freedom to do what they do best...we hope tomorrow is a great day and Neymar is inspired, like the other players."

At the World Cup on home soil four years ago, Brazil were subjected to an infamous 7-1 semi-final humiliation at the hands of eventual champions Germany.

Had Die Mannschaft pipped Mexico to second spot in Group F, Monday's clash would have been a repeat of that meeting, but Silva brushed aside suggestions his side would have preferred the chance for revenge over Joachim Low's men.

"After the last match people were asking a lot about Germany, I don't think we have to worry about Germany and what happened," Silva said.

"Football is to be played, the less you talk the better it is. Of course they are a team that didn't make it, like Argentina and Portugal.

"I don't think we have to focus on Germany, Germany belongs to the past and we cannot reverse history. We have to live match to match and seize the opportunities, like the match tomorrow."