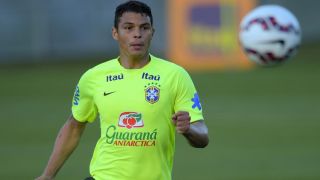 Brazil defender Thiago Silva admits the Copa America has arrived at the wrong time for his nation.

Under Dunga, Brazil have responded to their dreadful finish to last year's World Cup by going on an eight-match winning streak.

Silva and his team face Mexico in a friendly on Sunday and Honduras three days later before starting their Copa campaign against Peru on June 14.

Along with the likes of Argentina, Chile and Colombia, Brazil are among the favourites to win the tournament despite their World Cup campaign.

But Silva said the future was bright for Brazil, although the Copa may have come too soon for Dunga's group.

"This depends on people's opinion. You are giving your own opinion, and I can give mine, and we are going to look at it this way," he said.

"Of course, it's inevitable to say that this isn't the best moment. Colombia had a great World Cup. Argentina got to the final. Brazil kind of went out a bit worse as a result for the game against Germany [the 7-1 semi-final loss].

"Since then there has been regrouping, new players have been arriving, there's a different technical commission.

"So this takes a bit of time so we can be able to be in the best state possible, but I think independent of this, the team is training well, and is well put together.

"There are good players like Everton [Ribeiro], that played two extraordinary Brasileiro championships with Cruzeiro.

"I think that the Brazilian squad will take a little bit longer to work together, but in the near future we're going to be proud of this team."

Ribeiro believes he is close to earning a starting spot in midfield, but understands competition is fierce.

The 26-year-old Cruzeiro attacker said he simply wanted to do what was best for Brazil.

"We know that we have this position open. So I think that myself, [Philippe] Coutinho, Douglas Costa, are going to be looking and working for this spot," Ribeiro said.

"We're going to be looking confidently for this spot for whoever suits it best. Who fits better on the team, but there's an open spot we're all looking to train well to be able to start with the team.

"And if I am on the starting line, even better, but if not I'm here to help and do the best I can for the national team."