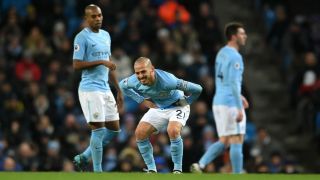 Manchester City's battle for honours on four fronts potentially suffered a major blow on Wednesday as David Silva hobbled out of their Premier League match against West Brom.

Silva pulled up after the half hour at the Etihad Stadum, with Fernandinho having given the hosts a 19th-minute lead.

The Spain playmaker appeared to be troubled by a pain above his left hip and had a bandage applied around his lower abdomen at the side of the pitch.

Attempts to continue proved futile and he made way for Ilkay Gundogan in the 39th minute, with West Brom Grzegorz Krychowiak having earlier limped off to be replaced by former City favourite Gareth Barry.

CITY SUB | Enforced change as can't continue. replaces the Spaniard.We'll have an update on whether that's an injury to El Mago asap! 1-0  January 31, 2018

It could provide a second injury headache in as many games for boss Pep Guardiola after Leroy Sane suffered ankle ligament damage as a result of a rash challenge from Cardiff City full-back Joe Bennett in Sunday's 2-0 FA Cup win in the Welsh capital. The Germany winger is expected to be sidelined for up to seven weeks.

Silva has amassed five goals and 11 assists over 26 appearances in all competitions this season and has continued playing for much of the last month despite making regular trips back to Valencia, where his partner gave birth to their prematurely born son last month.