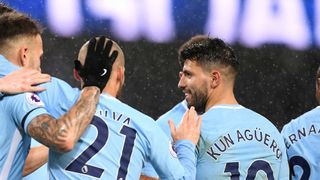 Sergio Aguero paid a warm tribute to David Silva after his Manchester City team-mate made a man-of-the-match return to action for the Premier League leaders.

Silva missed three of City's previous four top-flight matches due to personal reasons but captained Pep Guardiola's side against Watford at the Etihad Stadium on Tuesday, receiving a hero's reception from the home faithful.

And the Spain playmaker made an instant impact as his perfectly weighted pass released Leroy Sane to set up Raheem Sterling's opener inside the first minute of a 3-1 win.

Guardiola told a news conference afterwards that he faces being without Silva once more over the coming weeks because "family is the most important thing in life".

Aguero rounded off the scoring for City with his 16th of the season but was more inclined to highlight the 31-year-old's contribution.

"He is solving his problems, we are supporting him," the Argentina striker told reporters.

"Despite not having many training sessions he performed very well. He helps us a lot because for us he is a very important player."

: We are very happy is back with us. We don’t know how long he will be with us but you saw again today he is an essential player with us.He wants to stay but family is the most important thing in life.January 2, 2018

Aguero joined City in 2011 from Atletico Madrid, a year on from Silva's arrival from Valencia.

Silva's creative talents have played a significant role in Aguero becoming the club's all-time leading goalscorer and the 29-year-old holds his long-time colleague in the highest regard.

"Since I arrived David Silva was looking out for me," he added. "I would like to have him always on my team, I think he is one of the best."