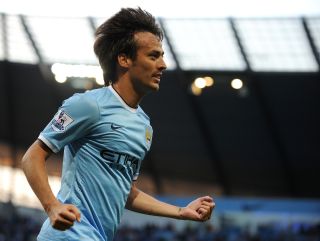 The Spanish playmaker has missed City's last five matches after sustaining a thigh problem while on international duty in August, with his last appearance coming in the 2-0 Premier League victory over Hull City on August 31.

However, the 27-year-old came through training on Tuesday and is available for selection against the Champions League holders.

And City manager Manuel Pellegrini has been handed a further boost with the news that striker Sergio Aguero is also fit for Bayern's visit to the Etihad Stadium after recovering from a minor knock.

"David is in the squad. I think he can at least play some minutes. Sergio is fit and he is also on the list," Pellegrini said.

The Chilean went on to say he expects his side to bounce back after their 3-2 Premier League loss to Aston Villa on Saturday.

The reverse ended an impressive run of form from City, which had seen them score 12 goals in three matches in all competitions.

"Of course, I always expect a big response from the players," Pellegrini continued.

"We respect the Champions League very well and it is very important for us to continue against the most difficult team in the group.

"I am sure we will see a very high performance tomorrow."

After seeing his team cruise to a 3-0 victory away to Viktoria Plzen in their opening Group D fixture, Pellegrini pledged he will not curb City's attacking instincts against Pep Guardiola's Bayern.

"For me it was very important to win the first three points against Viktoria Plzen. Now the second thing is to try to win our points at home," the former Malaga boss added.

"Bayern is a very strong team but we're also in a good moment and hopefully we can get the three points here.

"We never think about a draw. If we cannot win it's better to draw than lose but we're not going to go onto the pitch thinking of a draw against Bayern.

"From the first minute we will go for three points."