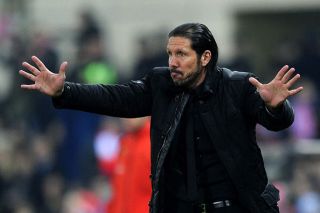 Both teams had half-chances but the draw saw Barca remain top of the table on goal difference exactly midway through the La Liga season.

Simeone hailed his side for their disciplined showing as they held a Barcelona team which had scored 13 goals in their past three games.

"Sometimes the game finishes 0-0 and the fan goes home disappointed because they come here looking for four, five or six goals," the Argentine coach said.

"Today was a game where we tried to play a smart game with our virtues and characteristics. I think we managed to do it.

"Barcelona scored many goals in its last games and they hurt you if you give them even a small chance but we didn't want that to happen."

Simeone pointed out the 'difference of 400 millions of euros' between the respective teams, with his team having an incredible first half of the campaign.

The 43-year-old urged his team to keep fighting as they aim to keep up with Barca.

"Thanks to the fact that we have a group of players who play 100 per cent in every game we are having these good results.

"Game by game, we need to keep going and stay where we are now."

Simeone congratulated his players for collecting 50 points halfway through the season but urged them to turn their attention to Tuesday's Copa del Rey second leg against Valencia.

"To be honest, 50 points is a lot but our players deserve it because they work hard, they run and fight during the games," he said.

"They have done everything they could to be at this point of the season where we are. I have to congratulate them.

"Now they have to rest and get ready for the next match on Tuesday, which is an important match if we want to stay in the Copa del Rey."