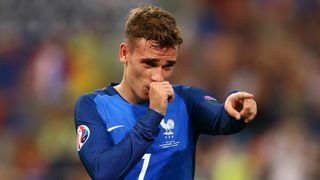 Diego Simeone has backed Atletico Madrid star Antoine Griezmann to become one of the three finalists for the 2016 Ballon d'Or.

Griezmann scored 32 goals in all competitions as Atletico reached the final of the Champions League and finished just three points behind champions Barcelona in LaLiga.

The 25-year-old went on to clinch the Golden Boot at Euro 2016 after scoring six times in France's run to the final on home soil, where they were beaten 1-0 by Portugal.

Despite his failure to lift silverware in the past year, Simeone insists that Griezmann deserves to be among the final three nominees when the prize is awarded next January.

"I've no doubt he should be in the final three," the Atleti boss told the media ahead of his side's International Champions Cup clash with Tottenham.

"He's one of the three best players in Europe and a candidate for the Ballon d'Or. He didn't win any titles, but he scored goals and was always decisive.

"Hopefully he will have the chance to win the Ballon d'Or."