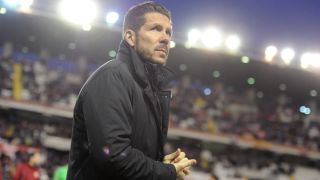 Atletico Madrid defender Juanfran has backed Diego Simeone to establish a legacy at the club to rival that of Alex Ferguson at Manchester United.

The former Argentina international has delivered stunning success in his first four years in charge at the Vicente Calderon, winning La Liga, the Copa del Rey and the Europa League, as well as reaching the Champions League final in 2014.

Simeone's exploits have seen him linked with a possible move away from Atletico, with United touted as one possible destination should they decide to call time on Louis van Gaal's spell in charge.

But Juanfran believes the 45-year-old could aim to match United icon Ferguson by staying in charge of the same side for years to come, telling Onda Cero: "He doesn't give me the feeling that he can leave. He signed until 2020 and he can extend that, for him there is no better team than ours.

"He feels what this club is - why can't he be the Ferguson of Atleti?"

Atletico have seen city rivals Real Madrid appoint Zinedine Zidane as head coach in the past month but, despite two wins and 10 goals scored in his first two matches in charge, Juanfran has little doubt that Simeone is the world's finest.

"I've heard that they're more comfortable with him. It's clear they're getting good results, they're going to fight for all competitions. [But] we have the best coach in the world," he said.

With Atletico currently top of La Liga after 20 matches, Juanfran has dismissed the suggestion that they do not play an appealing brand of football in order to get results.

"What is playing well?" he said. "For us it's to defend well, to feel good when the goalkeeper has little to do, to counter-attack well, that Koke moves between the lines and [Antoine] Griezmann is decisive, as happened yesterday [on Sunday against Las Palmas].

"Atletico play well the way I look at it. A fan of Barca or Madrid won't like us but our way of playing is what we want.

"La Liga is the strongest of all. To compete with Barca and Madrid is the most difficult thing. They are strong, with great teams behind us, like Valencia, Sevilla, Villarreal...

"Hopefully we stay there [top] for a few weeks. Then we'll say we're aiming for the title."

Atletico visit Camp Nou on January 30 for what could prove to be a pivotal game in the Liga title race, and Juanfran is looking forward to facing Barca forward Neymar once again.

"In some games I've stopped him and in others I haven't," added the 31-year-old. "There are games where he's good and others were he's not so good, hopefully in two weeks he won't be. And what happens on the pitch stays on the pitch."