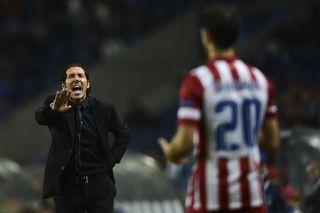 Brazil-born Costa, 25, is eligible to play for Spain and the country of his birth and Vicente Del Bosque urged the striker to make a decision after his team qualified for the 2014 FIFA World Cup.

But the saga has failed to unsettle Costa, who has netted 10 La Liga goals in eight games to be top of the goalscoring charts.

Asked what he would say if Costa came to him about the issue, Simeone - speaking before his team's clash against Espanyol - said: "I would tell him that we play tomorrow against Espanyol and that is an important match to win.

"I think that this is part of the football, but as when the situation is not the best you don't need to worry and keep working to improve it.

"When it's better, you still have to work to maintain it like that. And I don't know what else to do in any of those moments, just work when things are good or bad.

"And I think that he (Costa) is not thinking on what is or what isn't in press. He works, I see him fine and hope things to continue like that, as we are just in the beginning of the season."

Largely thanks to Costa, Atletico have won their first eight league games to be second to Barcelona only on goal difference.

They face eighth-placed Espanyol, who have suffered three straight losses in the league and are coached by former Atletico boss Javier Aguirre.

"The rival coach is well known here, he worked very well, he has a lot of experience and has spread into his team an important reaction since last season," Simeone said.

"I await a tough rival and we will have to read the match in consequence of what we will face, which will be difficult."