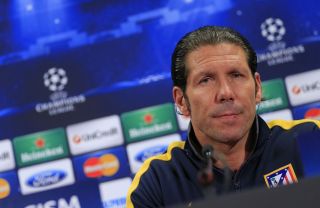 Raul Garcia gave Atletico the perfect start to the Group G encounter with a goal in the eighth minute, before strikes from Diego Costa in the 20th and 53rd minutes sealed a comfortable victory for the La Liga outfit.

Costa's brace - his 11th and 12th goals of the season - means he is the fourth Atletico player to score twice in his first UEFA Champions League game, a feat matched by Simeone.

The victory left Simeone's side five points clear at the top of the group with three wins from three matches but afterwards, the coach insisted his team would continue to take things one game at a time following strong starts both in Europe and domestically.

"We cannot afford to move away from this game by game mentality," he said.

"We know the difficulties we will face in the UEFA Champions League and in La Liga.

"It was a very good first half for us in terms of how we interpreted the way in which we had to control the game and its rhythm.

"Positioning Raul (Garcia) behind Diego Costa gave us a lot of strength, and our full-backs were also excellent."

Costa, playing in his first Champions League game after serving a two-match suspension, was delighted with the impact he made.

"I felt good out on the pitch and was very happy to make my UEFA Champions League debut in such a manner," he said.

"We played a great game. Our way of thinking is to take things on a game by game basis, trying to reach our maximum level in each encounter."