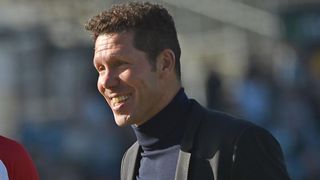 Atletico Madrid coach Diego Simeone saw plenty of positives from his youthful line-up despite suffering a 1-0 loss to Australian side Melbourne Victory.

Simeone elected to field a largely experimental team for their friendly with the A-League outfit in Geelong on Sunday, having picked a strong line-up against Tottenham two days prior.

The likes of Fernando Torres, Diego Godin, Filipe Luis and Gabi were kept on the bench, while Saul Niguez, Jan Oblak and Tiago were given short spells during the friendly match.

However, despite failing to find the net, Simeone was left impressed by his youngsters, praising promising talents such as Theo Hernandez, Caio Henrique, Amath Diedhiou, Rafael Borre and Juan Moreno.

"I am very happy [with the performance]. These games mean a lot for the youngsters," the Argentine said post-game at Simonds Stadium, as Nick Ansell's first-half header sealed the win for Victory.

"I liked Theo, I liked Caio, I liked Juan, Amath played well, Borre as well in the first half.

"If I have something to take from this game it's that they showed that they're playing well together and there is an alternative for the future."

Atletico created the better of the chances in the opening period, with Tiago controlling the tempo before being replaced by Thomas Partey in the 35th minute.

"The first half was good, with Tiago in the team it was a lot better, and I was left with a lot of positives to take from it," Simeone said. "The debut of [Diego] Jota, who came in with a knock also went well."

Simeone was also full of praise for opposition side Victory, who used the match as preparation for their round of 32 clash in the FFA Cup on Wednesday, where they face fellow A-League side Newcastle Jets.

"The youngsters are beginning to take shape and the best way to learn is against a team that showed a lot of fight and was very competitive," he added.

"I really liked number eight [striker Besart Berisha] and number six [midfielder Leigh Broxham]. They are a strong team that is very compact."