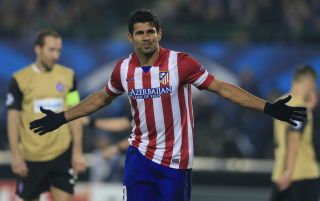 Costa, whose international future is up in the air with Spain eager for the Brazil-born 25-year-old to play for them, scored his second brace in three games against Austria Vienna in the UEFA Champions League on Tuesday.

The double brought Costa's tally for the season to 12 goals as Atletico moved five points clear at the top of Group G with a 3-0 win.

Afterwards, Simeone paid tribute to his in-form attacker, saying: "Diego Costa was unbelievable today, he had an excellent game, scored two goals and showed how important he is for the team.

"Raul Garcia also gave a fantastic performance, but I would like to praise the team as a whole.

"The whole team were compact and played well, with some nice attacks and goals."

Atletico lost their first La Liga game of the season on Saturday, going down 1-0 to Espanyol and slipping to second in the table as a result.

However, their European record remains unblemished, with Simeone keen to guard against complacency so it continues.

"We have nine points from three games, we are on a good run in the league and in the Champions League, but we cannot fall asleep," he added.

"We have to take it game by game and do our best to continue like this.

"We are going very well at the moment."