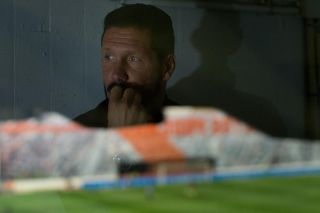 With Simeone watching from the stands serving the first of his eight-game ban, Atletico drew 0-0 in the first match of their La Liga title defence on Monday.

The Argentine was suspended for his protests and tapping the fourth official on the head during his side's Supercopa de Espana second leg win over Real Madrid.

But Simeone said there was little he could have done, even if in the dugout, as his team fatigued.

"Being so high up you couldn't see it as well. I don't think that having me on the field would've improved anything," he said.

"We came from playing on Tuesday and Friday and the effort from these days could be felt in the second half."

Simeone lamented his side's failure to take their chances in the first half, but believes the hosts were the better outfit after the break.

"The game lasts 90 minutes. The first half, the team played very well. They had three clear chances of scoring, it was dynamic, they played out wide but couldn't score," he said.

"In the second half, Rayo was better; we didn't play against a wall, we played against a team."