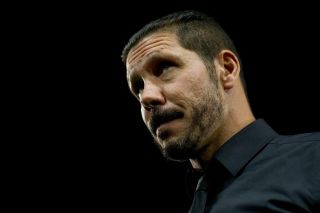 Simeone said while his men must continue to improve, the results have been admirable after such change to their set-up in the close-season - which saw them lose the likes of Diego Costa, Thibaut Courtois and Filipe Luis, but gain Mario Mandzukic and Antoine Griezmann.

"We have to improve and continue working hard.  This is what we like to do the most.  It was a good win and hopefully it will serve to encourage us," Simeone said in his post-match press conference.

"The characteristics of the players who left are not the same as those we've brought in.

"We are doing a great job with the new players who are still adapting.  Results are results.

Simeone said Eibar were brave in defeat at the Estadio Vicente Calderon, where Atletico led by two goals scored by Miranda and Mandzukic before Abraham pulled one back for the eventual losers.

"We knew it would be difficult to close the game, all of the games have been very close this season," the Argentine said.

"We did well to start the match, but then we couldn't get comfortable.

"The desire to claim the points was more than we had [in the previous game]."

Simeone did not rule out signing more players before Monday's deadline.

"I've spoken to the sporting directors.  There's still time to make signings.  We'll see who comes and who goes," he said.

The 44-year-old rued the timing of the international break, which will see Atletico next in action in La Liga on September 13 against Real Madrid.

"It's a shame that we'll lose so many of our players for 15 days," Simeone said.

"That didn't happen before.  Before, a lot of people stayed behind.  Now, every time, we are left with fewer players.

"That speaks highly of the good work they're doing and it's good for both the club and the players."