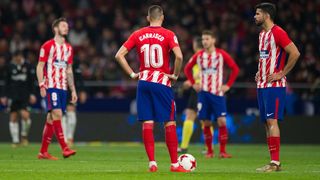 Atletico Madrid boss Diego Simeone does not believe his side's Copa del Rey defeat to Sevilla showed a worrying lack of composure from his players.

Diego Costa put the hosts ahead in the 73rd minute at the Wanda Metropolitano but late goals from Jesus Navas and Joaquin Correa gave Sevilla a 2-1 lead to take into the second leg.

Atleti's players have been accused of failing to stay focused in order to see out the victory, but Simeone feels it is too easy to blame the defeat on emotions and insists they could have killed the game sooner.

"The emotions on the pitch are difficult to control," he told a news conference. "Within the confines of a match, the team with more players has a better chance of winning.

"You always have to look for people who are balanced, in matches you have your moments and you must take advantage."

1 - Sevilla are the first Spanish team to win against Atletico at Wanda Metropolitano in all competitions. Historic. January 17, 2018

Simeone called on his players to make more of an impact off the bench when they resume their LaLiga duties against Girona on Saturday.

"We have to manage the situations of the guys who don't play from the start," he said. "Hopefully they will stay strong and help us.

"The team takes value from the people who are used as substitutes. They help to generate teamwork.

"We always look at things one match at a time. Girona is an important and tough opponent, a rival who are in good form and play intense, attacking football."