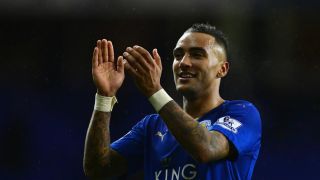 Leicester have stunned expectations to sit level-top in the Premier League with Arsenal after 22 games, and Simpson believes the experience of playing under the legendary manager at Manchester United lives on in several players.

Simpson, Danny Drinkwater, Richie de Laet and Kasper Schmeichel all spent their younger years at Old Trafford, and the full-back is convinced the attitude instilled in them by their former boss is paying off.

"There are a few of us who have that mentality from the manager, Sir Alex," he said.

"Losing hurts and even when Aston Villa scored that goal [against Leicester last week in the 1-1 draw], that hurt us. Especially as a defender I want to keep clean sheets.

"We kept a few on the bounce and in the dressing room, even though we drew and gone top of the league, it still hurt us. But through being at United from an early age they drive it into you that you play well and want to win.”

"Danny this season has shown it as well and I think he has been one of our key players this season. That has come from the coaches at youth team level at United. Kasper is the same, shouting at us like he is. He wants to keep clean sheets and it hurts him when we concede.

"We show it out there, how much we fight for each other and try to keep clean sheets because we have the players who, at any moment, can score."

Leicester host in-form Stoke City at the King Power Stadium on Saturday and Simpson has echoed manager Claudio Ranieri’s thoughts on not looking too far past the immediate task.

"He is right in what he is saying because it is literally one game at a time," he added.

"You can’t get carried away. Before you know it you can have a few iffy results. Stoke at home is going to be tough game because they are a good team with some very good players who are on form.

"They will be coming here with no fear and we have to be ready for that."