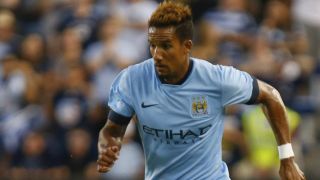 Sinclair is a regular in newspapers as a result of his partner Helen Flanagan, who is a model, and critics have questioned the 25-year-old's commitment to the game.

Having engineered a loan move away from Manchester City, Sinclair is now eager to show he can rediscover the form that saw him earn a move to Etihad Stadium from Swansea City.

"People who don't know me have an image and think 'Right, Scott Sinclair, he has got a celebrity girlfriend, he has got money and he doesn't care about football'," Sinclair said ahead of Sunday's trip to Arsenal.

"I still have the love of the game and want to be out there and prove myself. That’s part and parcel of being a footballer. Everyone goes shopping.

"If I am shopping on a Sunday and the game is on a Saturday, it is just (being) a normal human being – we go out, we shop, we go out to restaurants.

"It's 'Scott Sinclair is going out to a restaurant to eat' do you know what I mean?

"I'm not going to cry about it though, my girlfriend is in the public eye too, so I understand it."