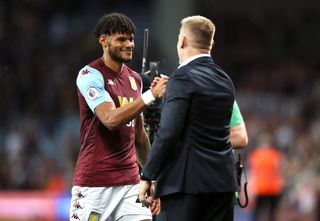 Aston Villa manager Dean Smith has hailed Tyrone Mings “a big influence” who has won himself a place in the hearts of the supporters.

It was exactly a year ago, on the final day of last year’s transfer window, that Smith made arguably his most important signing during his near 16 months at the helm by bringing in centre-back Mings on loan from Bournemouth.

It was a gamble as, due to injuries, Mings had only made 23 appearances for the Cherries over four years following an £8million move from Ipswich.

But Mings’ capture proved to be instrumental in helping Villa return to the Premier League via a Championship play-off final victory over Derby, leading to a permanent £20million move in July, and with his form this season earning him an England debut.

Ahead of Mings’ return to Bournemouth for Villa’s Premier League relegation clash on the south coast, Smith said: “January are risky windows in terms of who you want to bring into the football club.

“He has had to go and prove himself because he signed on a big contract from Ipswich for Bournemouth, and unfortunately had an awful lot of injuries while he was there and didn’t play a lot of games.

“What we have managed to do here is give him a number of games to prove himself and he has certainly done that. He has been a big influence.

“He has certainly won his way into the hearts of the supporters here as well with his leadership, style of play and attitude. It is his attitude which stands him above all others and has earned him that England call as well.”

Eyebrows were raised when Villa splashed out such a significant sum for Mings, not least those of Smith at the time, although he now believes the defender to be good value for money.

“I am still trying to get my head around a lot of the fees and figures that are out there now,” said Smith.

“But if you look at some of the other fees that have been paid, it has certainly been money well spent by us for sure.

“He has proven that he is Premier League level and Gareth Southgate has seen he is an international. He has been a very good player for myself and Aston Villa, and long may that continue.”

Saturday’s clash with Bournemouth, who are two places and two points below Villa, is another key battle for both clubs in their bid for survival.

Smith knows Mings will want to show Bournemouth boss Eddie Howe what he has missed out on.

“It will be good for Tyrone to go back, and he will want to go back and get a result that is for sure,” added Smith.

“He has done really well for us, is well liked in the dressing room, has a great personality and leadership qualities I have spoken about.

“He is a voice in the dressing room and understands what it is to be a top level professional. He works very hard to get to the top of the game.

“The biggest thing he has done is perform on the football pitch. That is what he had to do to win people over.”