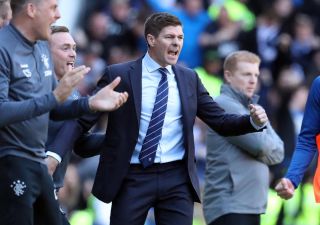 Former Rangers striker Gordon Smith has warned Steven Gerrard he cannot allow the Europa League to get in the way of attempts to halt Celtic reaching nine titles in a row.

Smith’s old side could be set for a daunting trip to Kosovo as they begin their quest for the group stages.

Gerrard’s side have landed either FC Prishtina – who finished second in the Kosovan Superleague last term – or St Joseph’s of Gibraltar in the first qualifying round.

The Light Blues’ potential opponents meet over two legs on June 27 and July 4 to decide who will host the Glasgow giants in the first leg, provisionally scheduled for July 11.

If Prishtina make it through, it will mean a 3,500-mile round trip to the Balkan state for starters as Gerrard looks to repeat last season’s feat, where his team overcame four qualifying rounds to make the group stages.

But the efforts of playing Thursday-Sunday for much of the early months of the campaign left Rangers sapped as they lost ground in the Ladbrokes Premiership to Celtic.

Now with their bitter rivals another step closer to a historic 10th straight title, Smith says Rangers must prioritise their objectives for the months ahead.

He said: “Both competitions are very important.

“The Europa League gives you good income but if you were to put one before the other, I’d say the league is more important.

“Rangers are not going to win the Europa League so while it would be nice to have a good run and to play some big teams at Ibrox, the main thing for the club is to challenge for the league title.”

Ryan Kent could also return on loan while a £600,000 move for Oldham defender George Edmundson could yet go through. And Smith believes it is key Gers continue to make improvements.

“Rangers are improving under Steven Gerrard but the main thing that needs to be realised is that it’s all very good having a good team but you need to have a good squad as well,” said Smith.

“You need to have good players who can come in when the main guys aren’t available. We saw that in the last game of the season. They lost to Kilmarnock after making five changes to to the team that beat Celtic the week before.

“That shows their squad isn’t strong enough but I think Steven Gerrard is aware of that and knows he has to strengthen.”

While Gers are looking at a long-haul flight if they end up going to Kosovo, Kilmarnock will be making a mere 500-mile journey to Wales and back for their first European clash since 2002 after being paired with Connah’s Quay Nomads.

Aberdeen will kick off their fifth straight Europa League campaign at Pittodrie after being drawn against Finnish outfit RoPS Rovaniemi.

Northern Ireland’s Ballymena will take on Malmo of Sweden if they can see their way past NSI Runavík of Iceland in the preliminary round.

Compatriots Crusaders face B36 Torshavn of the Faroe Islands, while Cliftonville and Welsh side Barry Town will fight it out for the chance to take on FK Haugesund of Norway when they also meet in the preliminary round.

Ireland’s Shamrock Rovers have also landed a trip to Norway after being paired with Brann while Cork City take on either Luxembourg’s Progres Niederkorn – who caused a major upset when they dumped Gers out of the competition two years ago – or Cardiff University.

Smith was speaking as he promoted a charity game at Airdrie’s Penny Cars Stadium on Saturday in aid of the Airdrie Community Trust. Tickets are available at the stadium, online at www.rossowenshow.com/charity-football-match and at the gate on match day.