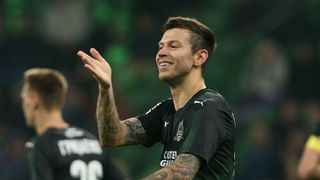 Russia captain Fedor Smolov has committed himself to Krasnodar, ending speculation that he will seal a deadline-day move to West Ham.

Reports had suggested Smolov was on the verge of agreeing a loan deal with the Premier League side, with the Hammers retaining an option to buy.

Smolov has scored 10 goals in 13 appearances for Krasnodar this season and emerged as a reported target to boost David Moyes' squad at West Ham.

However, despite "many negotiations", the 27-year-old has no intention of leaving ahead of a home World Cup.

"I have decided not to move to another team this winter," he said in a statement released by Krasnodar.

"Firstly, it would not be absolutely correct in relation to my current club - we are only one point behind in the struggle for a place in the Champions League.

"Secondly, I have spent two and a half years in Krasnodar, and I think that the club has the right to receive a decent compensation for my transfer. When I realised that this might not happen, I asked the club and agents to stop any negotiations on this topic.

"This winter, many negotiations were held, but there was no proposal that would be acceptable for the club and me.

"I will continue to work and play in Krasnodar to help the team achieve results and prepare well for the World Cup, and in the summer I will wait for proposals that Krasnodar will meet my goals."