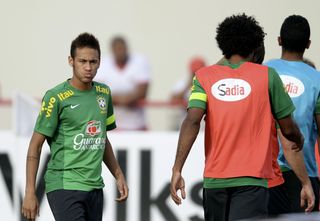 Holger Osieck's team are in the capital Brasilia ahead of the game at Estadio Nacional Mane Garrincha Stadium.

Brazil romped to the 2013 Confederations Cup title on home soil in June, beating world and European champions Spain 3-0 in the final.

And the depth of talent available to their coach Luiz Felipe Scolari means Shandong Luneng defender McGowan is expected a testing encounter this weekend.

"It's going to be a huge challenge taking on arguably the best country in the world just now in their own back garden," he said.

"It's not going to be an easy game at all, but it's one we are all looking forward to playing and it's a great chance for all of us to pit our wits against the best players and see how far we are off.

"Obviously it's going to be a hard task and a lot of defenders all across the world have tried and not succeeded in keeping these guys quiet. I think if we defend as a unit and as a whole team then we might have some more success and hopefully that's what we do."

Midfielder James Holland comes into the friendly on the back of his club side Austria Vienna qualifying for this season's UEFA Champions League for the first time in the club's history.

Putting aside his club successes, Holland believes the match against Brazil will give the Socceroos a good idea of where they stand and what areas they have to improve in before the World Cup kicks off in June next year.

"I think it will be a really good platform to test ourselves," Holland said.

"It's a team that doesn't need an introduction, five-time world champions, you look at the team on paper and they've got some of the best players in the world at the moment.

"I think for us it's a great opportunity to test ourselves and see where we are and hopefully help us work towards the World Cup next year."

Australia may take some comfort from the fact Brazil are coming off a surprise 1-0 loss to Switzerland in August, but will surely be determined not to suffer another upset.