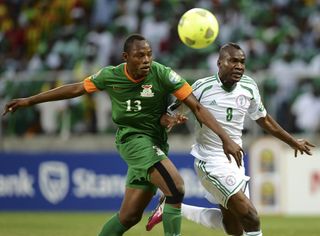 The duo will reunite with former boss Herve Renard, who led Zambia to triumph at the 2012 Africa Cup of Nations.

Defender Sunzu, who scored the winning penalty in Zambia's shootout triumph over Ivory Coast in the 2012 final, joins on a three-and-a-half-year deal from Congolese side TP Mazembe.

Meanwhile, midfielder Sinkala moves to the Stade Auguste Bonal on loan from Mazembe with a view to a permanent contract as Sochaux look to move out of the relegation zone in the second half of the Ligue 1 season.

Sochaux have survived relegation on the final day of the Ligue 1 campaign in each of the last two seasons and Sunzu is eager to help them repeat the feat.

"Herve Renard knows me well and knows how to manage me and how to motivate me," Sunzu said.

"We (Sunzu and Sinkala) arrived to save the club from relegation."

Sochaux are six points adrift of safety in 19th following their 2-1 win over Rennes in their final game before the mid-season break, a result that marked their first win in 11 league games.

Renard's men will look to boost their survival hopes on Saturday when Sochaux resume their league campaign at Lyon.