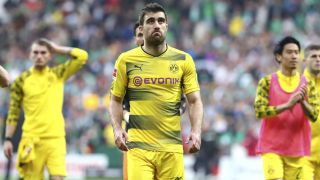 Sokratis Papastathopoulos has described joining his old friends Pierre-Emerick Aubameyang and Henrikh Mkhitaryan at Arsenal as a "beautiful" moment.

The Greece international has moved to London on what is described as "a long-term deal" after spending five seasons with Borussia Dortmund in the Bundesliga, making 186 appearances.

He has previously turned out for Werder Bremen, Genoa and AC Milan, and this will be his first season in English football.

Sokratis will join compatriot Konstantinos Mavropanos with the Gunners, but it is old team-mates Aubameyang and Mkhitaryan who he is most looking forward to linking up with.

"It's very beautiful that I have come but I also have two players I was together with for a lot of years," he said to his new club's official website.

"I know them both very well and I'm very happy.

"I spoke [to them] a lot of times. They said to me the best things about this club - that it is one big family, and of course they also called me not every day but a lot of times telling me to come here.

"Arsenal is one of the three biggest teams in the Premier League and one very big club. It has a lot of fans and a very big history. It's a beautiful moment and I'm very happy that I will be here for the next years."

Sokratis joins Arsenal despite their failure to qualify for the Champions League last season.

New manager Unai Emery, who replaced the legendary Arsene Wenger in May, has already gone about overhauling the squad, with Sokratis joining Bernd Leno and Stephan Lichtsteiner as incomings.

Uruguay defensive midfielder Lucas Torreira is also rumoured to have agreed a deal to join the Gunners from Sampdoria when his nation's World Cup campaign comes to an end.