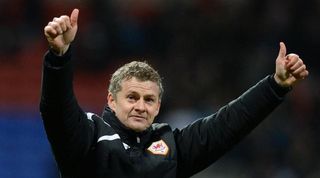 Cardiff sit 18th in the Premier League table and know their trip to the bottom-placed Sunderland could be vital in their survival aims.

The Welsh club are just two points adrift of safety but still have to face title-chasing Chelsea before the season ends.

And Solskjaer is aware that Sunday's fixture at the Stadium of Light could determine Cardiff's fate, with just three matches to play.

"This is a proper cup final and will probably determine it (relegation), but it depends on other results as well," the Norwegian said.

"It's a massive game for us and we will prepare as if it's the last game we will ever play. But it will mean the same for both sides.

"We'll probably need five points to give ourselves a chance. I don't think 34 will be enough, 35 might be, 36 I think will be."