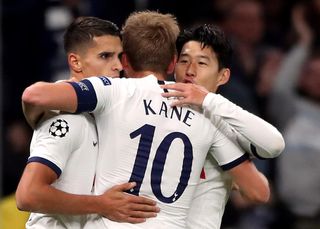 Tottenham gave their season a much-needed shot in the arm with a 5-0 demolition of Red Star Belgrade in the Champions League.

It has been a horrible start to the campaign for Mauricio Pochettino’s men, who had only won three games before this, but they put all their problems behind them in a pulsating display in Group B.

Harry Kane and Son Heung-min both scored twice while Erik Lamela had a red letter day on his 200th appearance for the club, adding a second-half goal to his two assists.

Pochettino, who has admitted his job could be on the line if their slump continues, will hope this can be the start of a resurgence, though that will be put to the immediate test in their next game when they visit Liverpool in the Premier League.

It has to be said that Red Star, who somehow were supported by over 200 fans despite a ban by UEFA, were not up to much, but Spurs were simply too hot to handle and produced a result that went some way to righting the wrongs of that 7-2 humiliation at the hands of Bayern Munich last time out.

It also had importance in their ambitions of making it out of the group as they now move into second place and will fancy their chances of progressing.